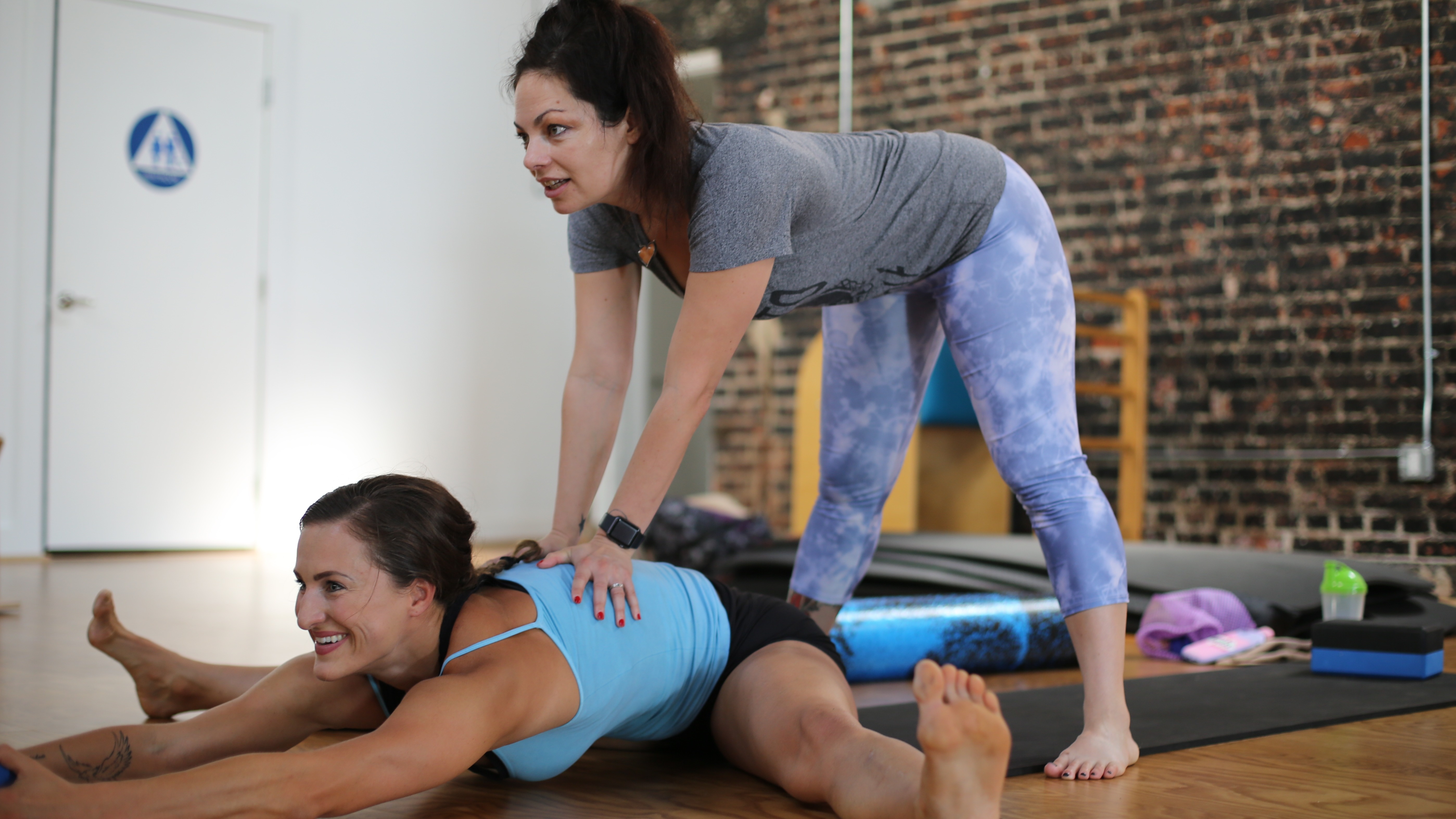 Kristina became a flexibility coach after her own work healing herself from injury and illness. While she had always been flexible, she did not start training contortion until she was 31, about 20 years behind the recommended age. Throughout most of her 20s, she had struggled with serious health problems and dance and movement became an integral part of her healing. In contortion, she found a physical practice that was as mentally and emotionally challenging as it was physically demanding. She fell in love with the way that flexibility training opens both body and mind. For five years she trained with renowned Mongolian contortionist Serchmaa Byamba at San Francisco Circus Center. Despite her advanced age, she was able to perform a contortion table act both as a duet with Serchmaa and as a soloist. She accompanied Serchmaa to Ulaanbaatar, Mongolia to train and learn more about the history and traditions of this beautiful art form. However the rigors of full-time training began to take their toll, and by 2010 Kristina was suffering from multiple injuries that made her unable to continue. Doctors told her that she would need surgery, and her contortion days were over. After so many years of battling physical limitations in her 20s, Kristina was unable to accept this diagnosis and began searching for other options. She discovered that the intense stretching had weakened her muscles and connective tissue, resulting in instability and pain. She began to work with a physical therapist to strengthen overstretched muscles and regain her strength. She earned her Pilates certification through Body Arts and Sciences and applied that knowledge to her own training. Within a year she was performing again, and actually able to achieve movements that had always been too difficult before. This method formed the foundation for Fit & Bendy. Kristina found that the methods that helped her recovery also helped her flexibility students at Cirque School LA where she founded the contortion and flexibility programs. In 2013 Kristina released her first DVD, Get Bent, and went into private practice. Since then she has taught thousands of students all over the world and has continued to expand her knowledge of the body, by studying methods including the targeted strengthening practice of Muscle Activation Technique, and the physical therapy techniques of Integrated Kinetic Neurology. Kristina coaches a wide variety of humans from celebrity performers and elite athletes to those recovering from injury and trauma.
Lily began her flexibility journey in 2009 while taking pole dancing classes. When she moved to San Francisco in 2011, she started taking contortion classes at several of the circus schools in the Bay Area, and when she moved to Los Angeles, she sought out Kristina Nekyia and Fit & Bendy, based on the recommendation of one of her instructors. Lily joined the Fit & Bendy team in 2015 as one of the first certified instructors and has helped many others in their flexibility training the same way that Fit & Bendy has helped her. “When I first started taking contortion classes in San Francisco, I got a lot of guidance that I didn’t find very helpful. There was a lot of cajoling me to relax, which felt pretty hard to do considering I was trying to bend in half backward, and I dreaded the day that I might literally be pushed so hard that I would start crying as I had seen some other students do. I definitely felt like I had missed the flexibility train because I hadn’t been doing this since I was a kid. That sentiment changed when I started taking classes from Kristina. Instead of the one-size-fits-all-must-bend-by-any-means-necessary approach, Kristina was equipped with the kinesthetic knowledge to emphasize active flexibility, which not only did my body happen to respond pretty well too, but is more useful in performance. I think what sets Fit & Bendy apart is the combination of understanding how the body works and then applying it individually to each student that comes through the door. For instance, for years a middle split felt like jamming my legs into my hip sockets but no inner thigh stretch. It took a while, but Kristina finally figured out the combination of strengthening exercises and stretches to help me reach my goal. It’s taken years (with a baby thrown in there), but I can now do middle splits without having to give myself a 10-minute pep talk and lots of moaning and groaning. In fact, now I’ve got a pretty solid over middle split!”
Dr. Su is a Doctor of Physical Therapy, as well as a Los Angeles-based performing artist and instructor. In addition to her DPT, she holds a Bachelor’s degree in World Arts & Cultures – Dance from UCLA, and a Master’s degree in Film & TV Production from USC. She began training dance in 1997, aerial in 2010, and pole in 2012. She has taught dance and circus fitness classes for 8 years at studios throughout Los Angeles, including Artistic Athletics, Luscious Maven, and Fit & Bendy. Dr. Su’s obsession with dance science, anatomy, and injury rehabilitation led her to the world of physical therapy. She now has her own physical therapy practice, Motion Art and Science, in which she specializes in movement systems analysis and the unique needs of dance, pole, and circus artists. She took her first class at Fit and Bendy in 2015 and immediately fell in love with Kristina’s intelligent approach to contortion training, incorporating it into her physical therapy practice.
Find Out More